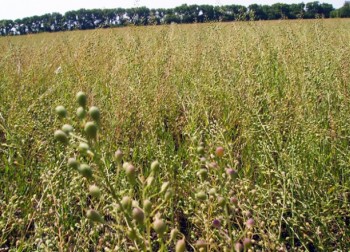 The Chief Executive Officer of the firm “Siaivo” Mykola Shkurko explained how to revive the cultivation of the valuable oilseed.

The CEO of the firm “Siaivo” Mykola Shkurko told AgroPortal.ua that because of the export duty such oilseed as camelina seed is also experiencing hard times. The company has been successfully engaged in exporting niche oilseeds for more than 20 years and  he knows firsthand  about all the aspects of this market. Judging by his words, the abolition of this duty could become a major reason for the revival of camelina growing in Ukraine, since this commodity is in great request worldwide. Since the year 1999 when the duty was represented, the price became non-competitive for export and the quantities appeared not sufficient for processing within the country. Thus, he says, the duty has ruined the production of the oilseed. The company “Siaivo” together with the Institute of oilseeds NAAS have prepared an economical substitution of the duty abolition on camelina seed, likewise on flax seed. Now it’s up to the powers that be to decide.