Opinion: Ukraine leaves the world market of flax due to production cuts 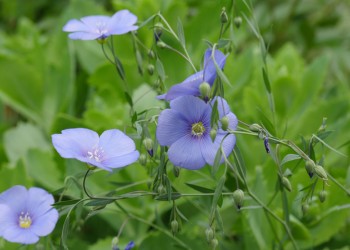 Lately, there are reports of the growth of the flax industry in Ukraine, but this is not the case.

This was stated in comment for AgroPortal.ua by the General Director of EPCF "Siaivo" LTD, Chairman of the Board of Directors of the PU “Flax and Hemp Development Association of Ukraine” Mykola Shkurko.

He’s reminded that recently Deputy Minister of Agrarian Policy on European Integration Olga Trofimtseva had reported that export of oilseed flax from Ukraine for 2013-17 year had increased from 10,9 to 56,8 thousand tons, and linseed oil - from 2,8 to 9,9 thousand tons.

"At first glance it may seem that the industry is experiencing rapid growth, whereas during the last two years there has been a significant reduction in crop area," said Shkurko.

"Such dynamics of production definitely leads to a drop in exports," said Shkurko.

According to him, if we compare production in Ukraine and in the world, then we can see the opposite trends: decline in Ukraine, growth in the world.

"That is, Ukraine with its meager volumes, simply falls out from the world market. The small harvest this year and the relatively higher domestic price of flax seeds forced the main processor of this oil plant PSC " Nizhynsky Zhyrcombinat " to prefer sunflower. Reduction in domestic demand from the processors will trigger the further decline of the sown area and degradation of the flax growing culture, which in future may lead to the necessity for import of flax seeds ", - predicts Shkurko.

In his opinion, the saving of the industry requires the adoption of urgent measures to stimulate the production of flax oilseeds: the abolition of export duty (in the Verkhovna Rada there are registered bills 4737 and 9202), the improvement of DSTU 4967: 2008, adding the new position "edible flax seeds" to the Harmonized Commodity Code classifier, the support of domestic selection and attraction of foreign experience.